The Swissnox S-Watt is a cheap S0-Impulse energy meter. Its available on eBay and Amazon for around 18 €. 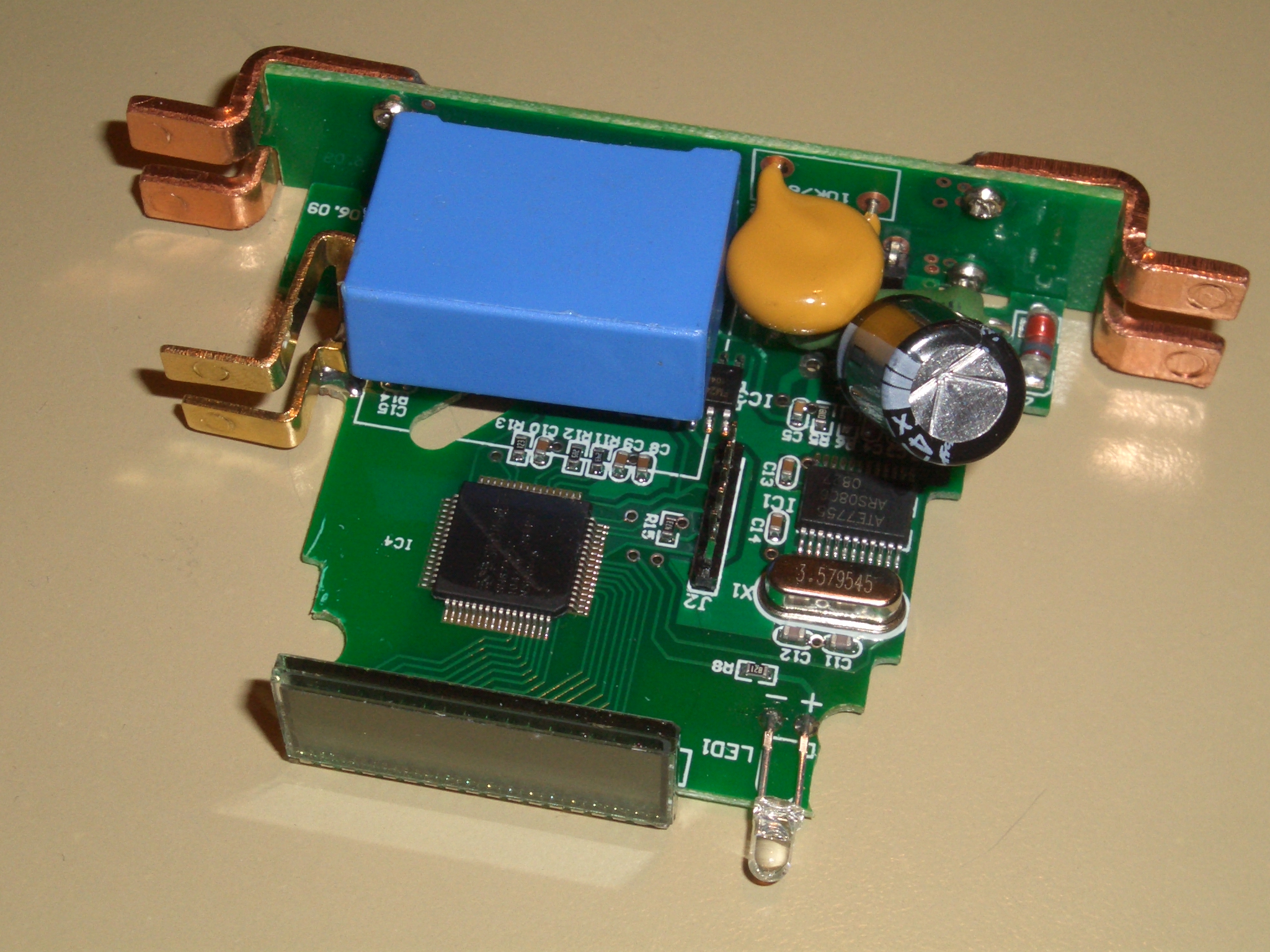 Modification to get a high pulse-rate output

By doing a few easy steps, you can change your S0 Output to a very high frequency output.

See schematic below. Black wires are already there. Grey wires are also there but only for layout purposes. The red wire shows, where u have to work. 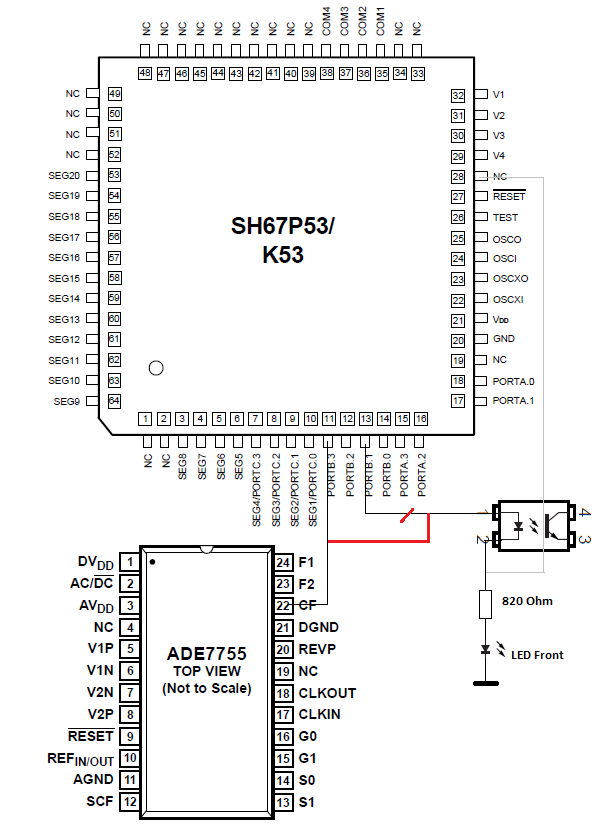 It's very easy to do. Just lift one pin of the Optocoupler and connect it to a via as shown in the picture. 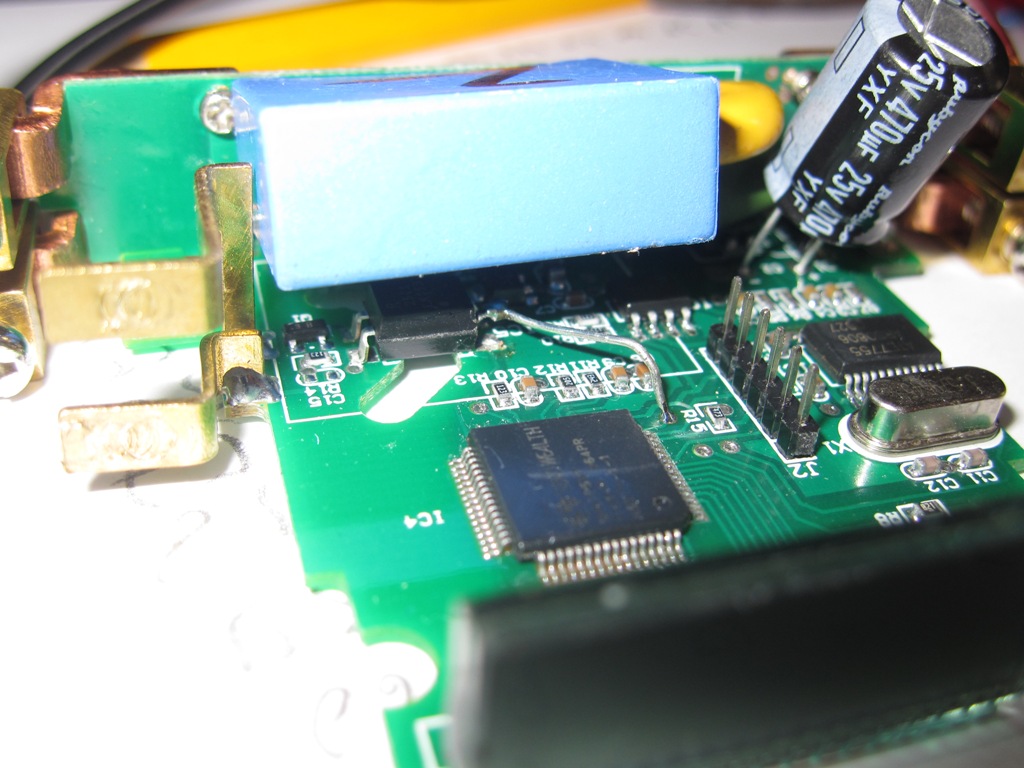 Signal output with a 2,7k pull-down and 9V battery on S0 Output.

Calibration can be done very easy when you read out the eeprom.

I verified this, by counting the 7755 pulses between the pulses of the normal S0 output. They are exactly the value 0x03 of the eeprom!

Note that 410.000 imp/kWh are not set in stone. After modifying 16 S-Watts and recalibrating them using actual measurement rather than reading the EEPROM, I found that mine are now between 242 and 256 times faster than before (that would be between 484.000 and 512.000 imp/kWh). Every S-Watt will behave differently after the modification and every one needs to be calibrated.

The width (duration) of an impulse drops from 70-90ms to 0.5ms after the modification. Depending on what counter you use and how many S-Watts you like to keep track of, it could be easy to miss a few pulses, so it is important to keep this in mind.

The two halves of the case are held together by the (snapped on) covers at the terminals, and slighty glued at the bottom. Jam a large screwdriver in between the case and covers from the bottom (remove the rail clip first, also using a little violence), and pry them off (in some of my devices some glue got in there too, tough luck). then gently pry apart the side covers from the display side, until the glue breaks.

The chip is labeled „ATE7755“, but google turns up nothing for that. It appears that it's a clone of the analog devices ADE7755. All pins i checked so far match the ADE7755 pinout. 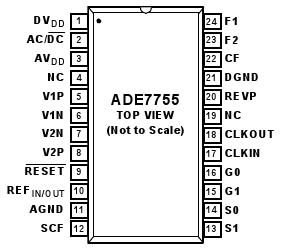 Curiously, the only connection between the ATE7755 and the controller is the 7755's „CF“ pin, which is, according to the datasheet:

The normal pulse output pins (F1 and F2) are not connected. The output signal to the optocoupler is generated by the controller.

Some measurements of the signal (kd302 used as reference): 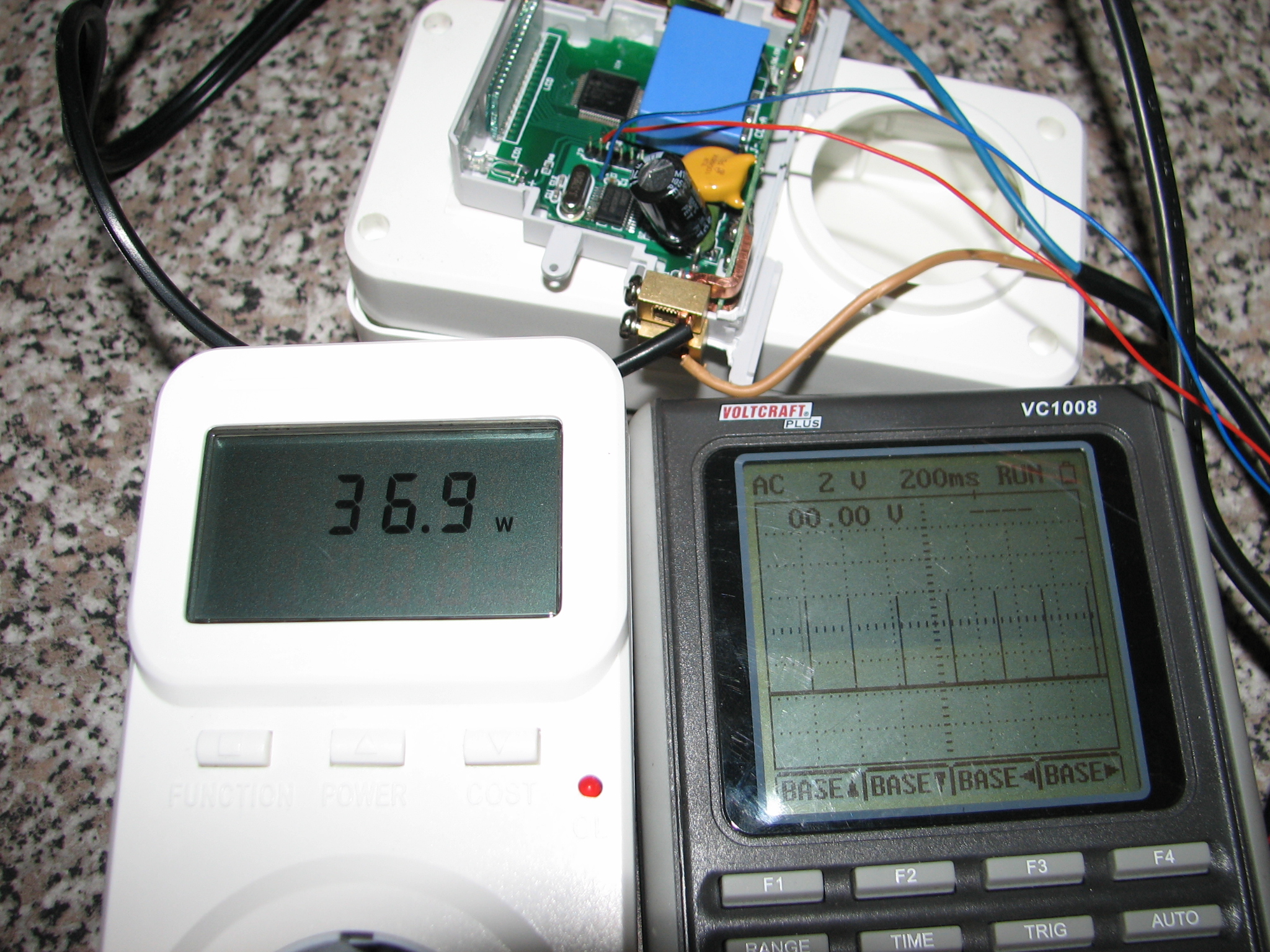 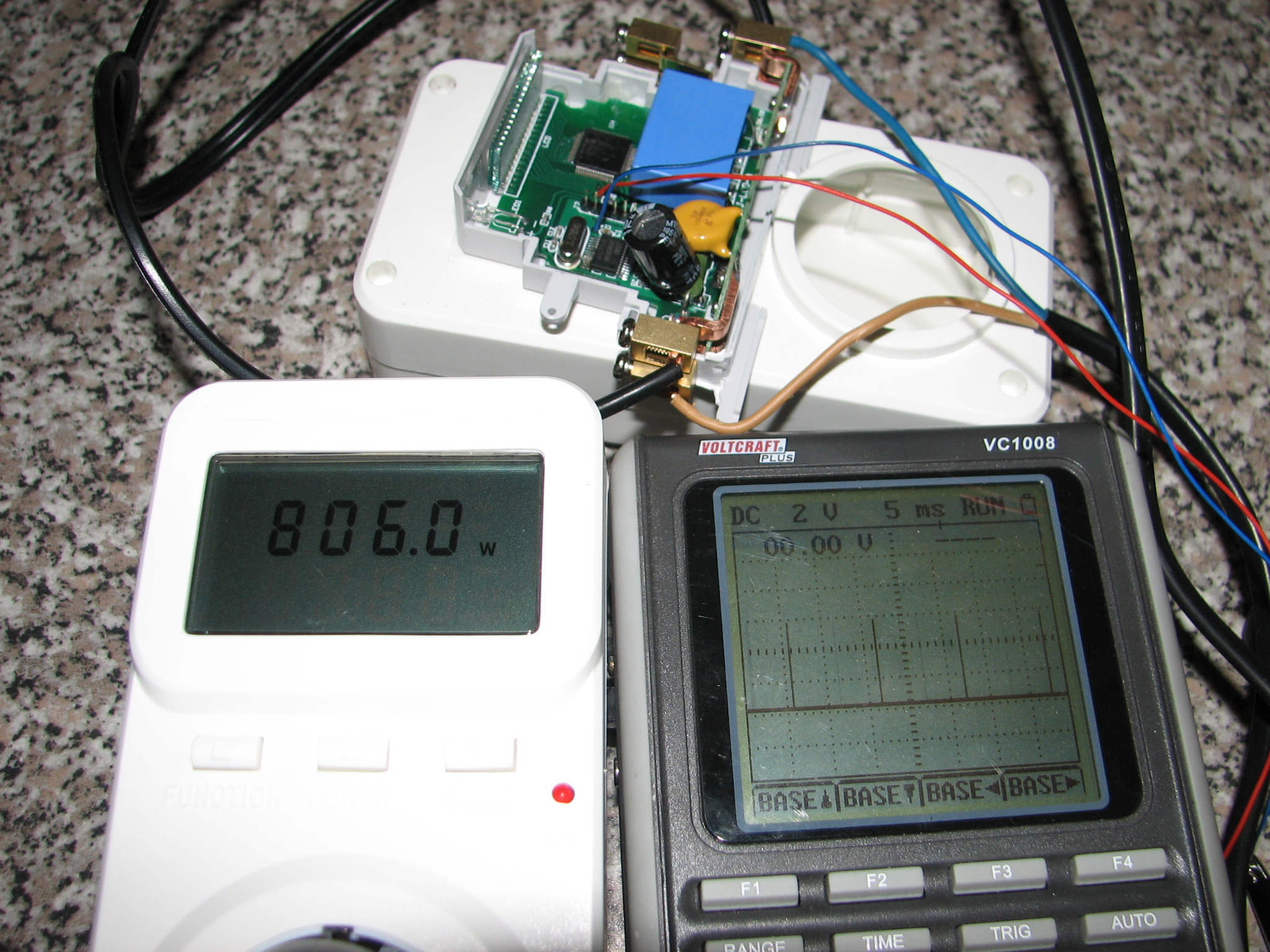 That just leaves the question of how calibration is handled. 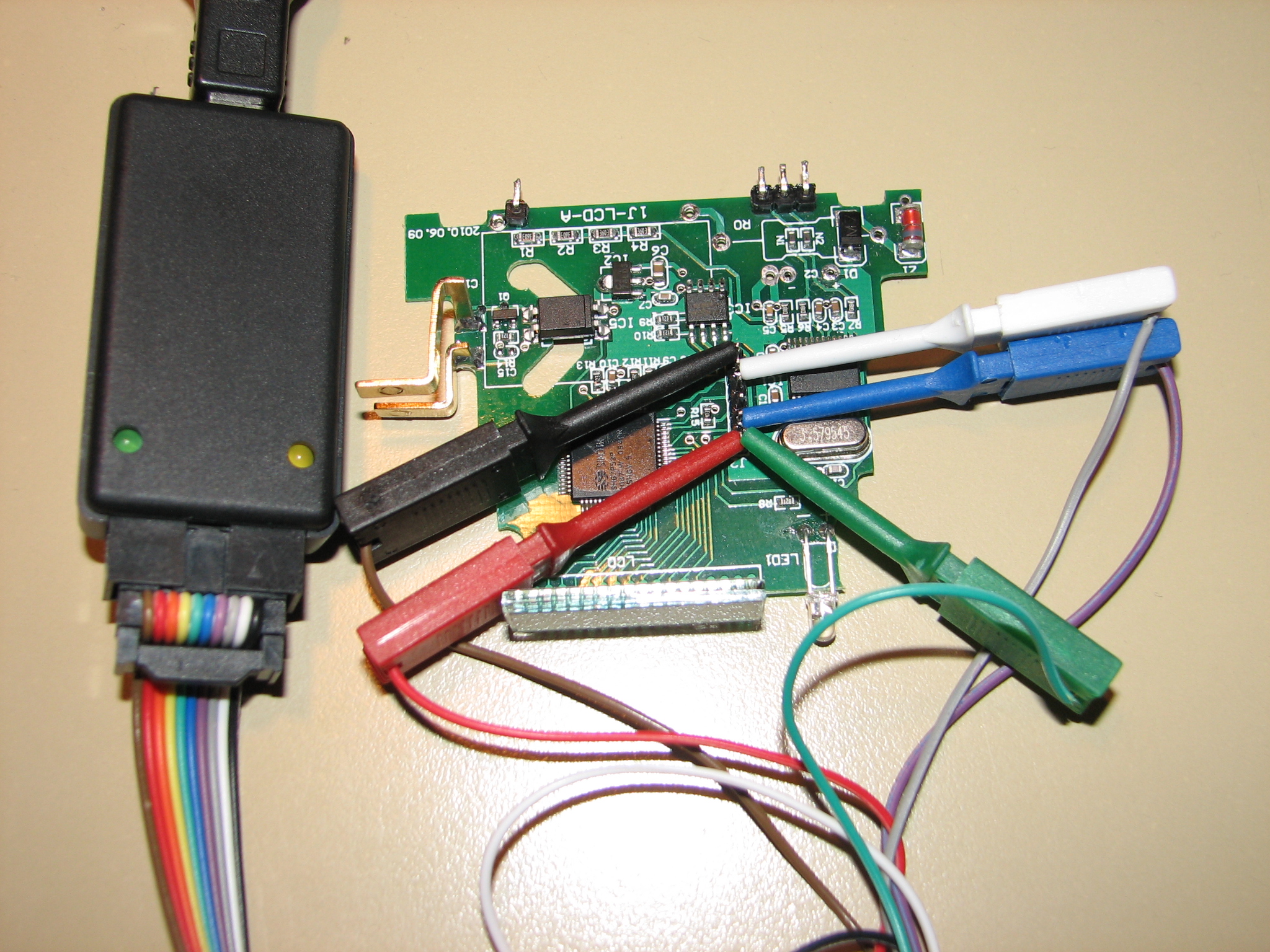 (When the large capacitor(?) is connected, the board can't be powered from the bus pirate, because it assumes there's a short. The board in the picture has the large power supply components removed for taking pictures of the PCB.)

This is the device used for the CF measurements above, counter at 0.07kWh:

So the second line must be the counter value, with unused places left at 0xFF. The first line (only difference between the two) must be the calibration value?

Either there are different versions of the device, or the above schematic is not 100% correct. Also, a not connected pin on the controller is misused to route a trace (red) under the controller. ew… 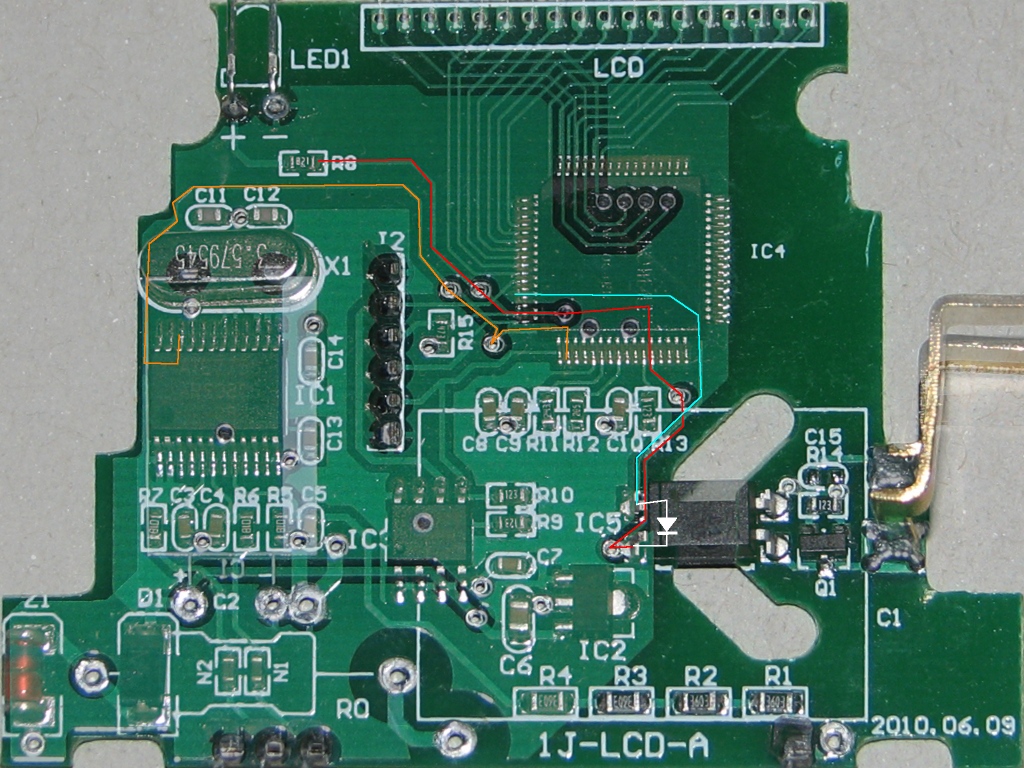 I dont think there are different versions of the device because your picture shows the same circuit as determined in the shematic above. Just the routing is different. Have a closer look.

In my device, CF is connected to portA.0, your schematic connects CF to portB.3, which is i2c SCL in my device.